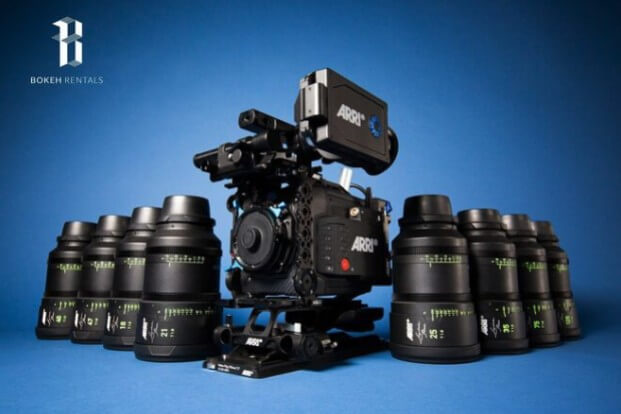 ALEXA MINI LF & SIGNATURE PRIMES In Spring of 2019, Arri announced their new camera which has changed the game in large format imaging. The Alexa Mini LF has the same size ALEV III sensor as the much larger Alexa LF (36 x 25mm, 4.4K) in a 5.7-pound compact body very similar in form to the revered Alexa Mini. Perfect both for controlled studio environments and rugged shooting, the Mini LF is just as versatile as the Alexa Mini. Arri’s gorgeous color science and remarkable dynamic range are now available in a large format accessible both to indie filmmakers and professional productions. The current influx of large format cinema cameras has been followed by a plethora of lenses with image circles covering full frame. Arri’s own large-format signature primes are the perfect match for the Mini LF. Beautiful skin tone rendition, deep blacks, medium contrast and organic colors prepare the image for Arris famous color science in the Mini LF’s sensor. A fast aperture of T1.8, slight softening while maintaining resolution and smooth focus falloff make these lenses the ideal companion for cinematic full-frame shooting. Read on to learn more about the Mini LF, from its sensor technology to recording formats, as well as its exceptional pairing with Arri’s signature primes. ALEV III SENSOR Arri has long been the captain of digital color science. It is widely agreed upon that film stock achieves the most beautiful colors possible in film; while contested, it is fair to say the Alexa line of cinema cameras is the closest digital has gotten to this ideal: rich, naturalistic color, pleasing noise, and great dynamic range. What goes on behind the scenes is a closely-held secret by Arri. Tests have shown that the Alexa cameras emulate the response of film to light, therefore achieving more pleasant and natural colors. It is common knowledge that Arri uses a dual-gain architecture, meaning that each photo-site outputs two 14-bit values covering different exposure ranges, thus increasing the camera’s overall dynamic range. The sensor photo-sites are also very large, increasing light sensitivity, decreasing the noise floor and increasing dynamic range. You can read more about the ALEV III sensor on Arri’s website. HARDWARE The Mini LF’s body has some major upgrades in comparison to the Alexa Mini. The slick new viewfinder, MVF-2, has eyepiece heating/defogging and real-time regulation of the image’s color accuracy. Stereo scratch mics are a huge help for syncing audio and music video work. The camera records to Codex Compact Drives, which supports its higher resolution recording. RECORDING FORMATS The Mini LF records a variety of Apple ProRes and ARRIRAW flavors. It’s notable that the 16:9 recording mode has an image circle of 36.35mm, which allows for the use of some Super 35mm lenses. Check out this chart from Arri as you plan your next shoot.

SIGNATURE PRIMES: THE LOOK Creamy, smooth mid-tones and shadows with deep blacks. Naturalistic focus drop-off. Organic color and skin tone rendition. Check out the Signature Primes reel here. These lenses are truly modern, with gorgeous rendering of fine detail, no breathing, and a rear magnetic filter and net holder which allows for the look to be manipulated. These are a perfect choice for when you need clarity and detail but don’t want to get too clinical. The lenses have character, but nothing that will distract or cause the images to be inflexible down the line. THE LPL SYSTEM Both the Signature Primes and the Mini LF feature Arri’s new LPL (large positive locking) lens mount, which has a wide diameter and shorter flange depth than the standard PL mount. This allows for large format lenses to be more compact while featuring low T-stops and great bokeh. The Signature Primes feature Arri’s updated data transmission system, LDS-2, which allows for much higher data rates than the previous generation and is made exclusively for LPL. Learn more about the new LPL mount on Arri’s website. We have both the Mini LF and the Signature Primes available at Bokeh, and are working on a test with this combination right now. Check back on our website in the coming weeks for an in-depth look at what makes this a great combination.