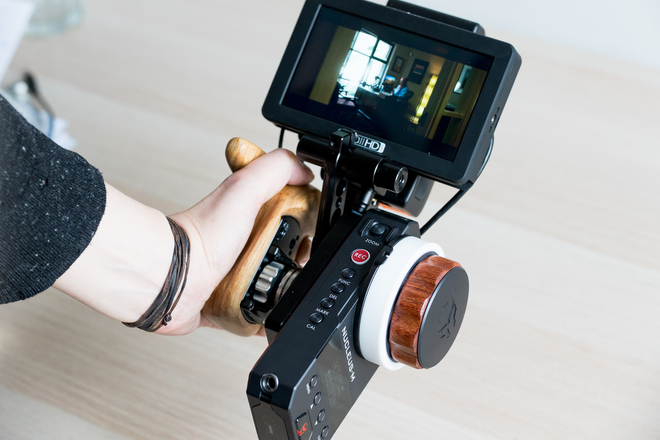 The most underappreciated aspect of cinematography is achieving and maintaining focus. It used to be that focus pullers would run off rulers and good ole fashioned intuition—but thankfully, the analog days are behind us, and 21st century filmmakers now have a dazzling selection of toys to keep their subjects in focus, no matter the depth of field.

Bokeh Rentals has compiled a list of the best follow focuses available in 2021. NOTE: These are remote follow focuses that allow wireless lens control—opposed to cheaper wired or focus-whip follow focuses, which only allow mechanical lens manipulation.

The Tilta Nucleus-M is an excellent bargain for low budget productions, with capabilities that extend far beyond other sub-$1000 items—while actually having wireless motor capabilities. It doesn’t have all the fancier perks of its pricier counterparts—such as adjustable friction knobs or ritzy touchscreens—but it gets the job done. The Nucleus-M runs about $1,400 for the full kit, which contains both the FIX hand controller and a separate hand control that can also operate focus and iris.

Even for this little price, you can use handy buttons on the side to set marks for each shot. This way, once you hit your focus mark, the unit will vibrate—alerting the operator to stop adjusting. Similarly, you can use the buttons to set a range on the focus knob, which can implement a hard-stop mechanism, so your focus puller doesn’t overdo it.

There’s also a handy little reverse-direction function on the unit, if, say, your 2nd AC has to re-orient themselves to the other side of the camera in between takes. This way, you can still spin the focus knob on the unit in the same direction to achieve the same result, without anyone getting confused and fussing up the focus mid-take.

The Nucleus-M doesn’t even come with batteries—but it’s an excellent deal for wireless focus-pulling. Here’s a in-depth, half-hour walkthrough of the Tilta Nucleus-M system from IPG Rentals:

The WCU-4 from ARRI is a top-shelf remote follow focus containing many of the essential features of its similarly priced competitor products. It’s got daylight-visible monitors, a focus knob with adjustable friction, an iris slider, six programmable buttons for things like shutter angle, frame rate, white balance, and more. Also, the WCU-4 can do focus tracking—automatic focus using an ultrasonic focus measurer—in situations where manual focus isn’t necessary or won’t cut it. The dynamic focus tracking system of the WCU-4 is leagues ahead of earlier auto-focus technology and places the WCU-4 among the top of the list.

Another feature of the WCU-4’s customization is its different vibration patterns. Implementing vibration patterns as a tactile alert system while filming can be very useful to an operator who needs the heads-up when a mark has been reached, or battery or storage is running low. These programmable, handy notifications allow the operator to focus solely on the craft of operating, and their customizations can be saved onto an SD card for later use, whether on this system or another rental.

Because the WCU-4 is an ARRI product, you can add an optional software license to enable remote control of all ALEXA cameras (with the exception of the ALEXA HD Plus). The WCU-4 can also control the AMIRA when you combine the Universal Motor Controller.

Rent the WCU-4 from Bokeh Rentals

The Teradek RT lens control system is lightweight, multi-functional, and the most expensive of our selection. The full kit costs $11,999.95 and can be purchased directly from Teradek’s website. Teradek’s option is ultra-compatible with RED systems, features programmable buttons and sliders, and can even work from 5000ft away. Built for accessibility, the motors on this follow focus are near-silent, and the RT’s six axis build allows modular functionality for your rig. If you’re looking to treat your production to a cream of the crop lens system, the Teradek RT Motion might be the way to go. Check out the video below to see just how simple it is to set up the RT Motion:

It’s only about twelve hundred dollars more than the ARRI WCU-4, but the Preston HU4 (“hand unit”) has even more bells and whistles. Most notably: a daylight-visible touchscreen. Now, an OLED touchscreen isn’t a must-have for ACs, but it does offer quite some more functionality—such as its pinch-to-zoom scales that help narrow measurements even further.

The HU4 has a lot of familiarity with its predecessor; it’s mainly the top-notch features that are expanded in its update. If you’re interested in what Preston has to offer, but don’t quite wish to shell out for their newest, shiniest product, you can also check out the Hand Unit 3, which is still a fantastic follow focus. Much like the ARRI WCU-4, the Preston HU4 has the splash-proof housing, five pre-marked focus rings, lens mapping capabilities, an iris slider, adjustable drag/friction on its focus knobs, even the programmable buttons. The HU4 can even store 1000 lens profiles, just in case you plan on using one thousand unique camera lenses. Also, with the Preston Cinema smartphone app, you can share your lens profiles wirelessly for later use. Another notable feature of this handy follow focus is its focus-freeze button, which is to be used alongside the dynamic focus-tracking system. Say you’re focused on someone twenty feet away, across the street, with autofocus on. Using the focus-freeze button, you can pause the focus; this way if a car, say, crosses frame between the lens and the actor, the focus will remain on the subject and not be shifted to the obstructive foreground feature. It’s these detailed operation features that make the HU4 highly intuitive for shooters. No Film School has a solid walkthrough with a Preston rep at Cinegear 2019: