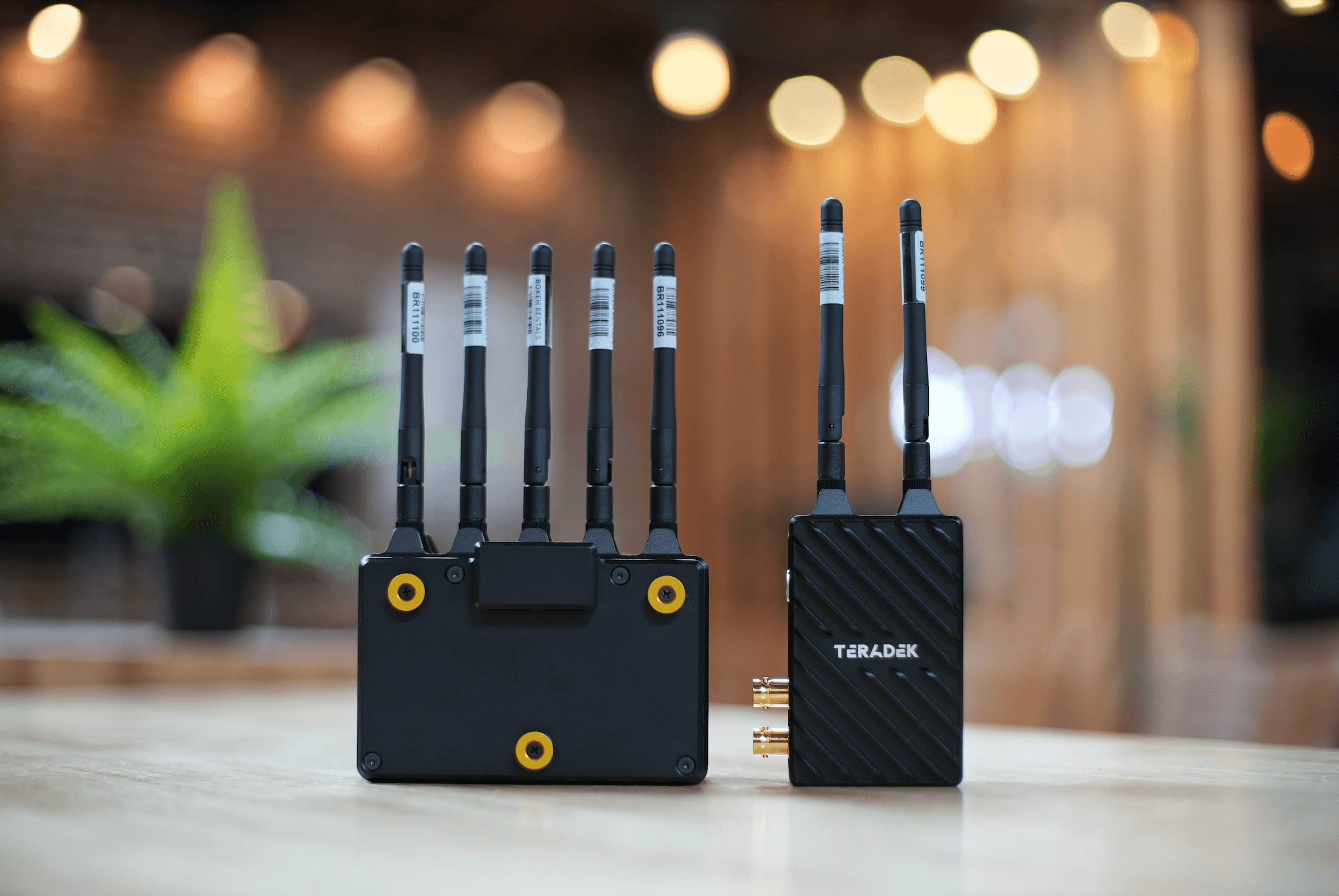 Teradek’s newest flagship in video transmitting-and-receiving is the Bolt 4K series—which includes a few high-tech components that work together to transmit uncompressed 4K video up to 5,000 feet away, wireless control cameras from 750 feet away, and much more for your production.

When dealing with wireless video transmission, there’s a lot of equipment involved, each with minor variations in capability. Essentially, any video transmission system requires both a TX and RX device—and the Bolt 4K lineup has two halves of each; the Bolt 4K and the less-expensive, compact Bolt 4K LT. Then, both the LT and non-LT products are subdivided into two tiers: the base tier, and the more expensive, more capable MAX variation.

Because of the cross-compatibility among the Bolt 4K series, any combination of non-LT/LT/MAX transmitters and receivers can operate, each to their respective capabilities. What this gives filmmakers is more latitude with their budget planning, and more opportunities for rental houses to get their inventory in use. The Bolt 4K interplay is made possible by Teradek’s award-winning BB3 chipset installed in all the lineup’s devices.

The newest Bolt 4K product is the Monitor Module TX, which the manufacturer presents as a game changer in 4K video transmission. “The Bolt 4K LT line is the onramp to 4K and HDR on-set monitoring, but it has been missing an ultra-long-range powerhouse,” said Greg Smokler, GM of Cine Production and Creative Solutions, in this ASC piece. “We’ve taken the pocket-sized envelope of the 4K LT and packed in the incredible long-range performance of the full Bolt 4K Max, resulting in the perfect balance of size and performance.”

The Bolt 4K Monitor Module TX is built to attach to any Smart 7 Monitor via HDMI 2.0, and has zero-delay 4K wireless video, supporting 10-Bit 4:2:2 towards a range of 750 feet. Also, the Bolt Monitor Module allows for something new: built-in, wireless camera control. Cameras that are currently compatible include the ARRI Alexa, Mini LF, and the Amira. Teradek has stated that compatibility will be expanded later this year to include wireless control for KOMODO and DSMC2.

In addition to camera compatibility with the Bolt 4K Monitor Module, it’s important to consider monitor capability. It’s not enough to have a monitor with an HDMI 2.0 port; you’ll need to ensure that any connected monitors have 4K capabilities.

Since the new Bolt 4K is a future-facing product, it also has smartphone-compatible capabilities. The free Teradek Bolt app allows quick, wireless pairing (from an Android or iPhone) to any transmitting or receiving device. While this may seem like a trend-chasing function, there’s actually quite some utility to the Bolt Manager app—you can apply LUTs to footage in real time, designate specific 5GHz channels to get the strongest transmission signal, and, because this is the 2020s, apply enhanced encryption to your footage. In fact, Teradek guarantees that your video transmissions cannot be received by any outside receivers without explicit permission.

However, with all the future-proofing involved in the Bolt 4K lineup, there’s a considerable amount of the past being phased out. As the name indicates, there is a troubling lack of compatibility with resolutions lower than 4K. The Bolt 4K LT can transmit an impressive amount of frame rates in 4K and 1080P, but in the event that you’ll need to transmit video with lower than 1080i resolution—in any frame rates lower than 59.95p or 50i—the Bolt 4K lineup won’t be of any help. Needless to say, this could potentially cause issues for any lower-budgeted, non-cinema projects, such as live performances, vlogging, or productions using vintage digital cameras.

This isn’t an oversight as much as it’s a business strategy. Teradek is among the upper echelon of wireless video transmission providers. Its products’ capabilities exceed those of its competition, and as a result, so do its prices. There are cheaper, non-4K alternatives to Teradek’s Bolt 4K system, such as the Hollyland COSMO 600 and the WVC-HD-3000, for anyone who doesn’t quite want to pay Teradek prices.

If you’re looking for the best wireless video transmitter/receiver performance with the newest capabilities, the Teradek Bolt 4K series is worth considering for your production. That is, if your budget could handle it.