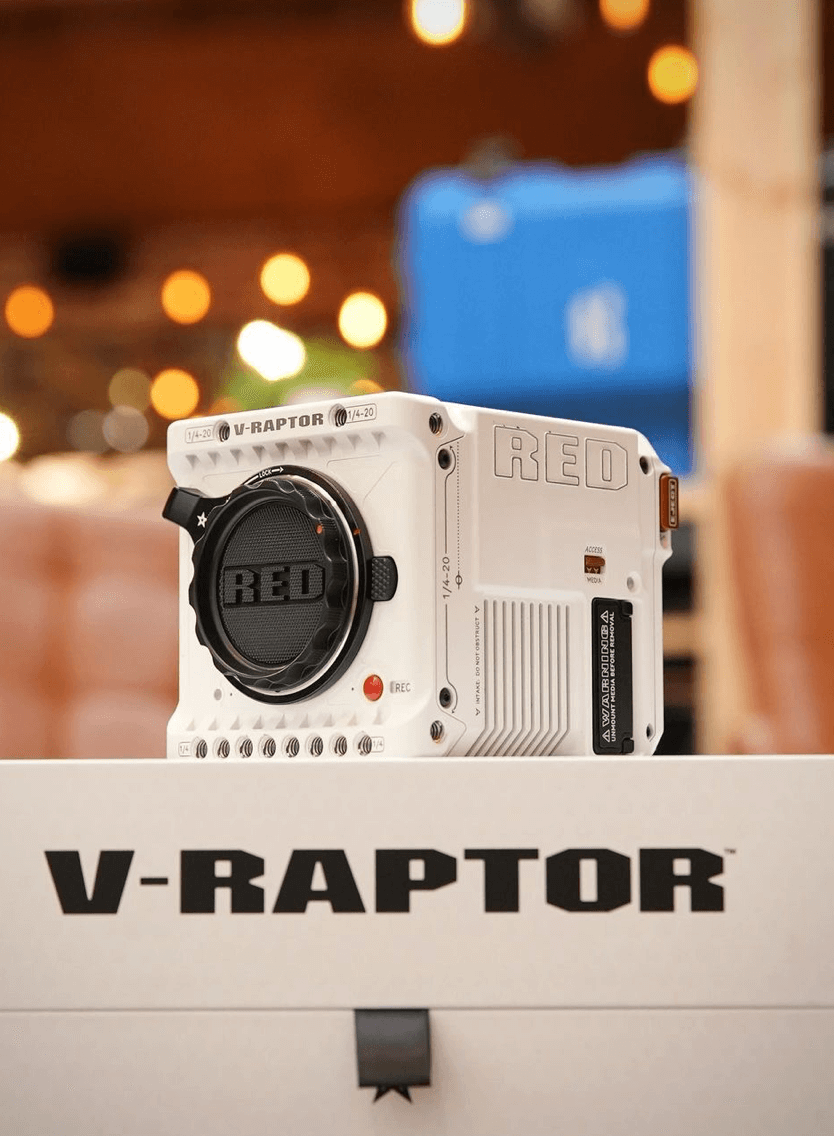 RED—always looking to break new ground in digital, large-format cinema—recently announced its newest groundbreaker: the V-RAPTOR. The V-RAPTOR—which comes after the compact, 6k Super35 KOMODO—is short for “Velociraptor”. Although it’s the second installment in RED’s all-caps reptilian-named series, the V-RAPTOR is the first in RED’s next generation DSMC3 bodies. Titles and labels aside, this means that the RAPTOR is a little larger than the KOMODO; but it more than makes up for the weight gain with jaw-dropping capabilities. For starters, the V-RAPTOR has a sensor that can shoot 8K large format and 6K Super35. In fact, similar to the KOMODO, the V-RAPTOR can be used with any large format or S35 lenses and always shoot over 4K resolution. The fps capabilities are something worth writing home about. The RAPTOR’s 8K sensor can shoot 8K in 120fps (150 fps at 2:4:1), 160fps at 6K (200 fps at 2:4:1), and 2K at 600fps. At that point, the crop is so intense, it may not even be worth pulling 600 fps. But, as with some of RED’s other creations, the technical capabilities aren’t centered around what’s practical—it’s about what’s possible. In other words, these are unique selling points. Cynical, sure—but a dash of skepticism is needed when dealing with RED’s eye-boggling statistics. Otherwise, you might end up a little disappointed by an exaggerated dynamic range. So, with all things gear, there comes a point when you need to lessen your grip on the numbers and look at the test footage. At this point, there’s not yet a vast library of V-RAPTOR footage to choose from. So, here’s test footage that RED released, themselves: The V-RAPTOR weighs 4.03lbs, a remarkable size for its massive capabilities. There’s no internal ND filter, but with the right adapter you can drop in NDs, no matte box necessary. As far as power goes, the V-RAPTOR’s phantom power is demanding, and rightly so—which means it’s best for any shooter to invest in V-Mount or Gold-Mount batteries. It’s also worth noting that the RAPTOR also has the fastest cinema-quality sensor scan time, cleanest shadows, and highest frame rates of any previous RED body. The state-of-the-art manufacturer touts the dynamic range as 17 stops, but as stated earlier, that number might be undercut by third party lab tests, much like the KOMODO’s (read above). Just like most products from RED, the V-RAPTOR is a versatile piece of technology with no singular purpose, and multiple capabilities that stretch further than any from the competition. It’s too early to find great test footage, but in the name of fun, here’s a run-and-gun demo shot by Jason Momoa: The V-RAPTOR brain alone sits at $24,500 retail, the standard kit at $29,580, and according to statements by RED, there may not be at trade-in program any time soon… so maybe it’s worth trying it out at a rental house. Rent from Bokeh Rentals Contact us to customize a package to suit your production needs at low prices!