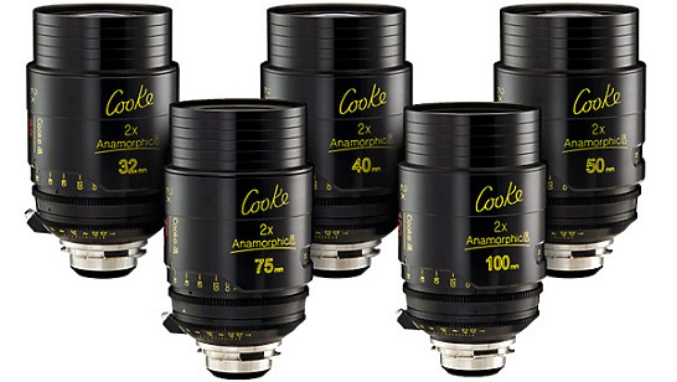 Cooke, the legendary optical manufacturer, thrives at anamorphic design. There’s no shortage of anamorphic qualities to combine with the Cooke Look, whether it's enhanced flare response or the varying squeeze factors between its 1.8x and 2x Anamorphics.

If you plan on using Cooke with anamorphic, however, it's worth learning how exactly squeeze factor affects your footage. Shooting formats can be a dry topic, but without proper knowledge, you can end up with wrongly sized frames, botched compositions, and unfortunately your audience will suffer the consequences.


WHAT IS SQUEEZE FACTOR?

By far, 2x squeeze is the most popular option among anamorphic shooters. Although it doesn't have the sensor coverage of the 1.8 squeeze, it is firmly grounded in audiences' visual palettes. See, 2x squeeze is what we recognize as "traditional Hollywood" anamorphic. Although more of the image is lost to cropping, the audience's eye is accustomed to a 2x squeeze.

The Cooke 2x Anamorphic Primes can be rented or sold in the following focal lengths: 32mm, 40mm, 50mm, 75mm, 100mm. The lens series has a universal aperture range of T2.3-T22, which means that lenses can be swapped without having to rearrange lighting setups.

Both the 1.8x and 2x Anamorphic Primes from Cooke use the /i technology system to log useful metadata as footage is captured. Data logged through the /i system include focal length, depth of field, focus, and f-stop. Metadata like this speeds up a production's workflow from shooting all the way to postproduction, especially on projects with extensive postproduction, which rely on a sturdy VFX pipeline. Some systems compatible with Cooke's /i technology include ARRI, Panavision, Sony, RED, and plenty of other industry-leading cameras.

All Cooke lenses are color-matched, color-balanced, and align themselves to the "Cooke Look". According to the manufacturer's official site, the Cooke look is defined as "a sharp, subtle, smooth rendering that provides dimensionality, high contrast, and pleases the eye".

Although its products contain variations of its signature look, Cooke optical designs tend to produce warm and natural visuals. Somewhere near the middle of the typical "digital vs vintage" spectrum, Cooke contains aberrations and flares without minimizing them towards a sterile, digital feel. Flares in particular are usually soft and out of focus, opposed to some newer glass, such as the BLACKWING7, which prides itself on exaggerated flares.

Should filmmakers find themselves looking to introduce flair to the Cooke look, the historical brand has  designed a special line of hyperactive glass.

Cooke has a special line of anamorphic offshoot lenses called Special Flare. These lenses have the same build as the other 1.8x and 2x anamorphics, but with a new coating designed to enhance the lens' flare response. SF lenses take the iconic blue-streak lens flare of anamorphics and intensify it, leaving a bold, expressive result.

Acquiring the SF lenses is a purely aesthetic decision, as it's manufactured for DPs that require a bolder enhancement to the Cooke Look. SFs are also useful for DPs that embrace flaring but prefer not to add any in post. Additionally, Special Flare lenses have found tremendous use in music video and commercial projects, packing a visual punch within a short runtime.

The SF lenses are color-balanced and color-matched with other Cooke lens series. This makes SF lenses specialty use lenses that can be used alongside non-SF Cooke lenses. So, filmmakers can rent an SF lens for just one day if they want to use the heightened anamorphic flares for a single dedicated setup.

Although there are technical factors to consider, cinematographers should consider the feeling they want to convey with their squeeze factor when choosing anamorphics. A Hollywood science fiction film shot with a 2x squeeze would feel inherently different than with a 1.8x squeeze, and it's up to the filmmakers to decide what works best.

Cooke lenses are among the highest priced on the market-- and for good reason. Purchasing a single Cooke Anamorphic Prime can cost you $36,500, so you're probably best off stopping by a rental house. Check out the various Cooke anamorphics packages from the LA-based Bokeh Rentals below!