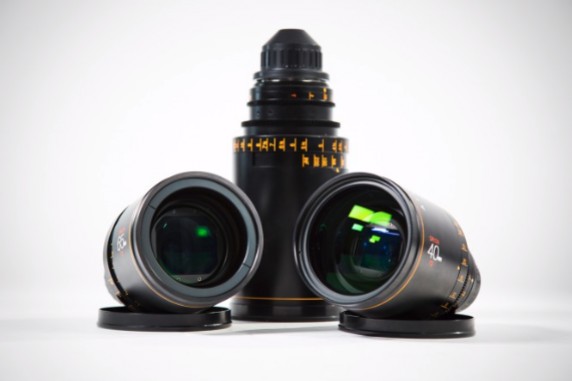 Digital Anamorphic – What is it?

The word anamorphic is derived from the latin anamorphosis, ana- meaning back, or again, and morphe meaning shape or form. Put together, it means transformation. Anamorphic refers to the class of imagery that requires the viewer to use certain tools or occupy a specific vantage point to view the undistorted image. This technique of imaging was invented by Renaissance painters. The above image is one example, a painting which requires a cylindrical mirror to be viewed. The bottom right image of Andrea Pozzoa’s 1694 painting in the church of Sant'Ignazio, Rome, is actually a flat ceiling, with a perspective that requires the viewer to stand in the center of the chapel to view the undistorted image.

Anamorphic lenses use these foundational principles of purposefully distorting an image for the image to then be returned to its undistorted state for viewing through a projector analogue or by pixel transformation digital. The original purpose of this was to capture a wider horizontal field of view than the width of the medium allows. The sketches below illustrate the ability of anamorphic imaging to capture a horizontal field of view wider than the image medium through initial squeezing of the image onto the medium which will then be de-squeezed later. The first image shows how a spherical lens would render the scene. The second image is what an anamorphic lens would render: a squeezed, distorted image. The final result is the de-squeezed anamorphic image: twice as wide as the original. This is an example of 2x anamorphic, meaning that the anamorphic lens squeezes the light by a factor of two. There are other squeeze factors, such as 1.5x and 1.33x, but 2x is the most common.

Anamorphic lenses were originally developed by Henri Jacques Chretien to give WWI military tanks a 180-degree field of view. Anamorphic did not attain popular use in film until the dominance of television started affecting theater ticket sales. Film studios had to capitalize on the strengths of the theater experience: color, and scale. Anamorphic lenses aided in the latter. In 1952, Twentieth Century Fox bought the rights to anamorphic imaging, with the goal being to create a spectacle out of going to the movies. Viewing films had to be monumental experiences, compared to the little 4:3 television in the living room. Anamorphic lenses allowed filmmakers to squeeze a wide, epic image onto the 35mm film stocks available and then de-squeeze it later in projection. This process is illustrated below. The bottom image is how the scene looks on the film stock: horizontally compressed, or squeezed. The top image is the final product.

Why not just film a 4:3 image with frame lines, then crop it to be widescreen later? A widescreen images width would cover the 35mm film stock, but not its height. Therefore a huge part of the film stock is wasted, AKA, loss of resolution and detail. Anamorphic lenses are used to gain back that vertical resolution, resulting in a significantly better image. The two images below show how anamorphic lenses utilize the entire surface area available; about twice the resolution is gained from the use of an anamorphic lens when used on a 35mm film stock, and about 40% on Super 35mm.

Digital sensors are by and large wider than 35mm film, which decreases the utilitarian need for anamorphic imaging. Spherical lenses used with these sensors can produce very wide images without the need for too much cropping. Using anamorphic lenses on digital sensors produces very high aspect ratios, and there is a loss of horizontal resolution compared to spherical lenses. The left image below is an example of a standard spherical lens used to cover the entire sensor. The right image is the same framing achieved with an anamorphic lens: the left and right sides of the sensor are not used, dramatically reducing the horizontal resolution of the image.

From a technical standpoint of using anamorphic only to preserve resolution, it only makes sense to shoot anamorphic on digital sensors when the required aspect ratio is extremely wide, such as 3:1 or 4:1, so the maximum sensor area is used in comparison to shooting spherical and cropping later.

The main reasons to shoot anamorphic on digital cameras are for artistic purposes. Anamorphic lenses have characteristic bokeh, flares, and heightened separation between the subject and background.

The oval-shaped element in anamorphic lenses which squeezes the light causes the out-of-focus parts of the image, or bokeh, to have an ovular shape. This much-loved component of anamorphic imagery gives the frame a sense of cinematic magic. Below is an image from Phoebe Waller-Bridge’s Fleabag, shot on Alexa Mini with Cooke anamorphic. Notice the ovular out-of-focus highlights in the background and the dramatic separation between foreground and background elements.