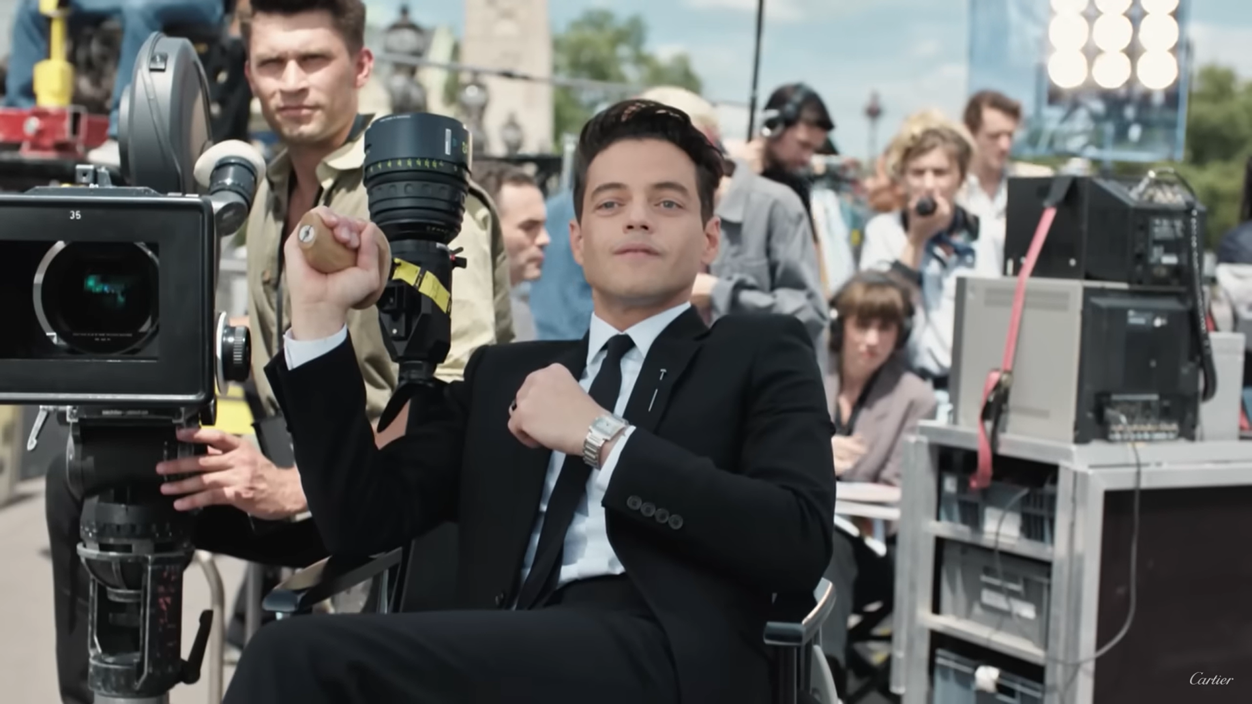 By Matthew Fresolone | January 24th, 2023
In the world of cinematography, there's always a film or television show to discuss. But this week, Bokeh Rentals is zooming in on a medium where state-of-the-art is often used, but often not recognized: promotional material.

In particular, this shot from the “Cartier Tank Française: directed by Guy Ritchie” spot caught our eye. In international film star Rami Malek's hand: the ARRI Master Prime. Now, before you think that Cartier chose the most expensive prop cinema lens—you can actually see in this behind-the-scenes video that the production did indeed shoot on Master Primes.

For both the look and style that Guy Richie (and Cartier) was going for, the ARRI Master Primes made an excellent choice. The look of this lens series is unparalleled, and the closest to perfection of any modern lens. Co-developed by ARRI and Zeiss, the Master Primes produce incredible resolution and high contrast. It has a clean image that stands in contrast to other leading cinema primes.

Watch the official Cartier spot below to see the ARRI Master Primes in action:

The production design of this spot takes advantage of the lenses' high contrast, as Rami Malek’s black suit and the sunlit bridge are both rendered clearly. Additionally, the high-speed quality of these lenses provided great opportunity for the crew to move fast—which no doubt played a factor when shooting on iconic Paris locations. In fact, Guy Ritchie mentions the crew’s speed in this behind-the-scenes featurette: “I had to move forward with a certain amount of momentum and not be too reticent about being technically correct”.

Across the entire package, the ARRI Master Primes have an impossibly fast aperture of T1.3. The lenses have a remarkably similar weight, which makes swapping simpler.

As far as optics go, the Master Primes have a 16-bladed iris that renders smooth, realistic bokeh. The iris is also evident in some shots that exhibit flaring in the Cartier ad. Clearly, the ARRI Master Primes’ exceptional technical capabilities allowed the crew to move fast while capturing gorgeous images of historic architecture. The ARRI Master Primes have a very clean image in many regards. It lends itself perfectly to the suave, classy look of this Cartier spot. There’s a handful of shots in the ad’s second half that would’ve been blown sky high were the lens flares captured in anything other than the ARRI Master Prime’s clean, resolute look. Other shots (the wide shot of Rami Malek sitting with the cine lens at 0:32, for example) feature massive lights shining near the lens, but producing very little flare. For sponsored content seeking a messier look, there are modern builds like the Blackwing7 primes, which deliberately splash the frame with expressive flares.

Part of the Master Prime's clean image also lies in its geometry. See, the Master Primes’ lack of distortion came in great use for this spot, which features a lot of movement towards subjects. Were there the geometric distortion of a vintage lens, then the dolly-in-and-around movement at 0:04-0:05 would not be nearly as seamless.

Guy Ritchie, his DP, and Cartier made a fantastic choice shooting their refined, Paris-inspired promos on the ARRI Master Primes. While their durable form factors and impressive apertures no doubt helped on a fast-paced shoot in the city's iconic locations, it's really the lenses' clean, slick images and pleasing skin rendition that make all the difference visually.

Therefore, if you're looking to use the ARRI Master Primes for your production, it's best to check out a reputable rental house.